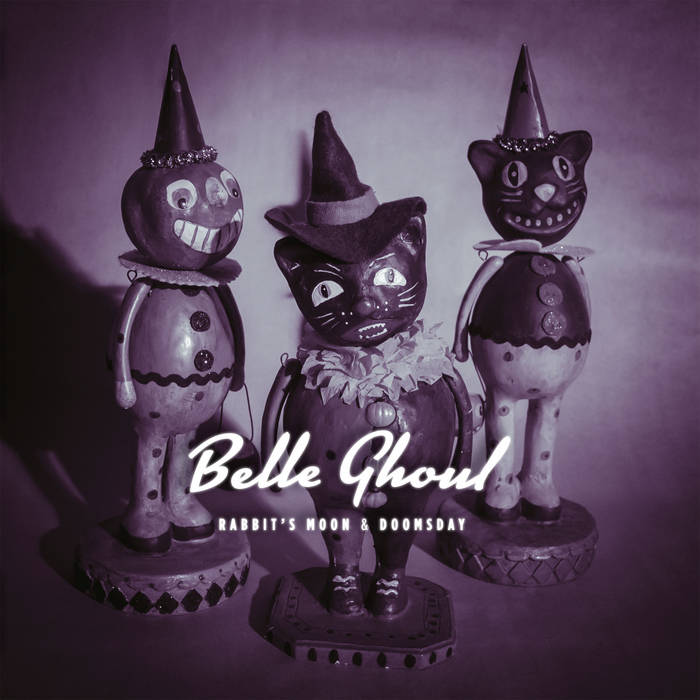 BELLE GHOUL, the group now formed by Christopher Tait (ELECTRIC SIX), Jesse Paris Smith (the daughter of Patti Smith and MC5’s guitarist Fred “Sonic” Smith), Matt Van, Zach Shipps and Mike Alonso, find themselves in a creative, prolific stage, which is confirmed by this new 10” mini-LP that opens up new doors within the group’s sound. It’s a slippery release, jumping between styles in a way that is only possible for two music-lovers this talented, playing with synthesizers and folk echoes, and getting deeper into the instrumental development. At the same time, it gets stronger, more forceful, especially in the immediate hits, even momentarily dipping into the mix of rock and electronic that characterized the sound of Tait’s other band.

The result is “Rabbit's Moon & Doomsday”. The album shifts between groove and danceable rock with bursts of pop, and that “Lake Of Fires” is proof. It gives off airs of the seventies amidst boosts from the hammond, while moving our feet with grace and style; the song is highly influenced by the “Twin Peaks” soundtrack. “Timepieces” holds on to a solid handful of Beatle-esque classicism with touches of psychedelic-pop and Californian choruses, and a solo that seems like it was created by Dean Wareham to decorate the resurrection of our beloved LUNA. “Momentum” closes side A; it’s an instrumental that moves from sober piano touches with echoes of glam and the recorder, to the DNTEL’s digital playfulness and LALI PUNA’s clicks. “Winter’s Gone” opens side B with evocative electronic pop that draws delicious scenery dressed up with accordions (!!!), while touching, heavy-hearted melodies sweep through to narrate, precisely, an endless winter of almost 5 months. “Around For The Weekend” gets back on the path to solid hits with a totally addictive keyboard riff, sunshine-pop influenced melodies, and rhythms that move to the beat of northern soul. “Mystery To Me” closes this limited edition with mysterious halos and wailing choruses, rising more than a few feet up off the ground.

This is definitely new proof of what a group, who is more difficult to classify, to define, and to place with every step, is capable of. Their music holds so many surprises, which we get a small taste of with every new release they offer us. May they continue with the same rhythm - three singles and a mini-LP in just over a year!